My Thoughts about Homeworlds

Why I love Homeworlds

The shape of space

The rules of Homeworlds don't say why systems are connected in the way that they are, or rather, they say, "That's just the way the wormholes are." That's good enough for some people, but to me, the rules cry out for a physical explanation. It should be possible to imagine something involving large distances or obstructions that would cause locations to be "connected" in the tripartite pattern of Homeworlds systems.

My best explanation is illustrated below. The connection rules of Homeworlds could be the result of three linear travel-preventing regions arranged in a triangle. The "sizes" of stars could refer to which side of the triangle they lie in. Homeworlds, with two stars, lie at the corners where travel is impossible from two sides of the triangle. 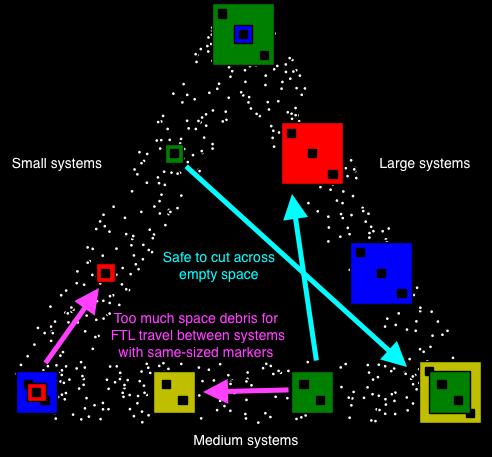 It's pretty easy to improvise Homeworlds equipment on the cheap. Each piece can be replaced with a card showing a ship on one side and a star on the other. The stars and ships just need to be colored and have some kind of size indicator. Star-side-up cards replace "standing" pyramids, and ship-side-up cards replace "flat" pyramids. They don't have the same bling factor, but cards are easy to make, pack, and transport.

I haven't made my own cards yet, but here's some art I've been working on. I'm drawing the stars as planets. Certain features will help to indicate the size. The small red has one moon, small yellow has one ring, small green has one dark spot, and small blue has one continent. The larger planets will have more of these features. 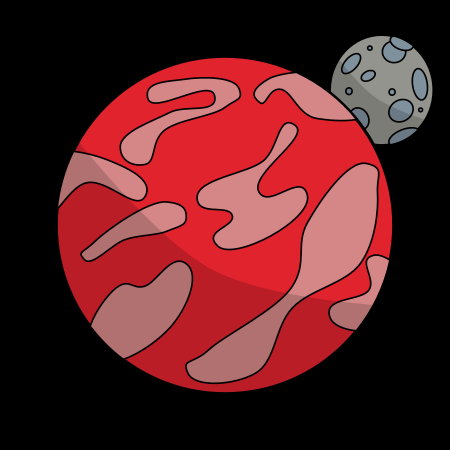 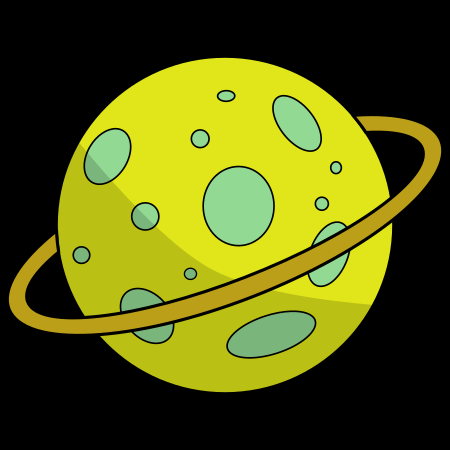 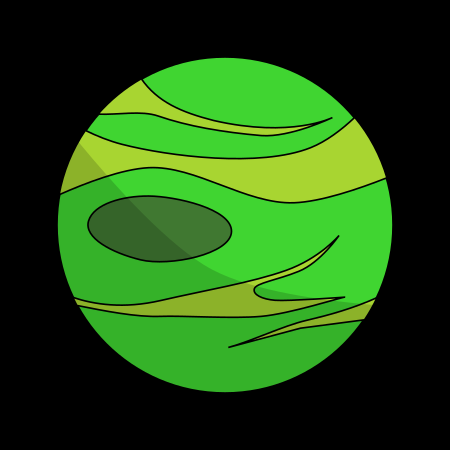 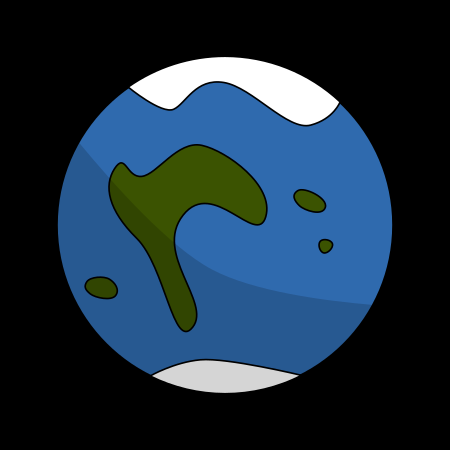 My thoughts on the rules

In chess, I think that the rule against putting yourself in check is a safeguard against losing accidentally. Without this rule, people would overlook self-checks and be forced to lose by the types of people who say, "You took your finger off the piece, so that has to be your move. I capture your king and win! Nyah nyah!" The no-self-check rule prevents that situation by saying, "No, you can't force your opponent to stick with the suicidal move because it's not even legal."

In Homeworlds, there's definitely no rule against moving into "check" (setting up your opponent to destroy you on their turn). Compared to chess, it's much harder to identify the check condition, and watching for check is part of the challenge. But unlike chess--where capturing your king is something that only your opponent can do-- your own turn action can destroy you in Homeworlds.

I don't see any need for it to be illegal to abandon your homeworld. Except for beginners, I expect that it would be rare that someone would accidentally attempt a move that abandons their homeworld. I take it for granted that players are allowed to resign from games, so if they want to make one last move as they resign, I don't see why not. Additionally, if homeworld abandonment is always allowed, then abandoning the homeworld at the same time that you eliminate your opponent doesn't need to be treated as a special case.

But if a player does abandon their homeworld, I think that they should have to confirm that they are deliberately ending the game. For one thing, requiring confirmation protects beginners from pedants. Also, in any form of computer-based Homeworlds, accidental self-elimination might be as easy as a tiny slip of the finger, so requiring confirmation could protect clumsy experts too.

Eliminating opponent and self in the same move

The latest official rules and the community have accepted that simultaneous elimination is legal and triggers a draw. I was reluctant to accept this rule for a while, but it's grown on me.

The FAQ page—and common sense—dictate that a game is drawn if a position is repeated several times and the players agree to end the game with no winner. However, this is not a very precise rule. I suggest that, like in chess, a threefold repetition of the exact same position (including which player is on-move) should be sufficient for either player to unilaterally declare the game drawn. If somehow the position loop involves discovering a new system, then the system names should not be considered when determining whether two positions are identical (if the systems are being given names at all).

When friends play, a player can just say, "Oh knock it off. That's too many repetitions. It's a draw." But I think a precise rule is important for serious play like tournaments. For example, if players are using clocks and one player has a significant time advantage, they could use a position loop to force the other player to run out of time. If they are playing strictly by the game rules, a looping game isn't a draw unless both players agree, so the ill-mannered player just has to deny that they believe the game is stuck. Players could also churlishly use position loops to wear their opponents down mentally.

Any tournaments that I run will have a specific move repetition rule.

Passing before creating a homeworld

The rules say that you may pass your turn and take no action. But if you are allowed to pass every turn without ever creating a homeworld, you can't exactly lose. Your homeworld can't be destroyed or taken over because it hasn't been created. If this is allowed, a player could force a draw by never making any move at all.

The obvious solution is to disallow passing a player's first turn. The Pyramid Quartet rules can be interpreted with this meaning since passing isn't mentioned in the "First Turn" section.

Here's the situation: a player sacrifices a blue ship (at least medium) and uses the two trade actions to swap the colors of two of their same-sized ships (e.g. a r2 ship becomes g2 and a g2 ship becomes r2). This is obviously legal if a copy of at least one of involved pieces (say the g2) is in the bank. In this case the color changes can happen one at a time:

I think it's somewhat reasonable to reorder the operations in a way that doesn't require any pieces to be in the bank at the beginning of the turn:

All versions of the rules agree that a blue action consists of "swapping" a ship with a piece from the bank, so it's pretty clear that the rule writers don't intend for this reordered move to be legal.

For a few years, I thought it would be cool to allow this move. It cuts a little slack for a player struggling to position their ships while the bank is empty, but it's unusual and not powerful.

Right now, it's March 2020 and I'm starting to change my mind. An important part of the argument in my head for the validity of this move is, "The beginning and end states are valid, so why not just skip past a technical wrinkle in the transition?" The reason I've stopped liking this argument so much is that the same reasoning could be applied to this situation: all pieces of some size are being used as ships and a played wants to sacrifice a medium yellow to pass through a system of that size to access a homeworld. It's easy to imagine a temporary system of the right size that is never actually put on the table with a star, but that robs the game of an interesting bit of strategy (and part of the point of the "fortress" setup).

So, I don't plan to evangelize about the bankless swap anymore.

Sinister Homeworlds is a game with more than two players where each player's objective is to eliminate the player on their left. The word "sinister" comes from the Latin word for "on the left-hand side," so it fits the game pretty well.

Except, I think the name is backwards: the person "on your left" is the "sinister" person. Modernly, sinister sort of means "out to get you," so linguistically, it would make more sense to me if each person needed to fear the player to their left. This would mean each person was actually trying to eliminate the player on their right.

Changing the direction of the targeting would also have an important impact on gameplay. The player who comes before you in turn order has a little extra power over you. After everyone else moves, they get the last opportunity to mess up the bank and keep you from building what you want. Turn order normally passes to the left, which means that, in Sinister HW, the player who is trying to eliminate you gets the turn just before you. Your killer has the most control over your building opportunities.

If each player were instead trying to eliminate the opponent on their right (or equivalently, if the direction of play were reversed), then the player who interferes with your building plans is the one you're trying to kill. I prefer the idea of this style of play since I like the principle of granting some advantage to the defender (as in Risk and WW5). Besides, it only seems fair that you should get to mess with the economy of someone who is trying to destroy your homeworld.

Reversing the targeting direction would also give players the last turn before they lose. The guy who is trying to eliminate me goes next, so I know exactly what it is that I must to defend myself against. Other players' turns don't get in the way. Even if the other players were helping my killer on previous turns, the other players don't get to affect anything between my defensive move and my attacker's move. Speaking in theory, I prefer this reversed style to traditional Sinister HW.